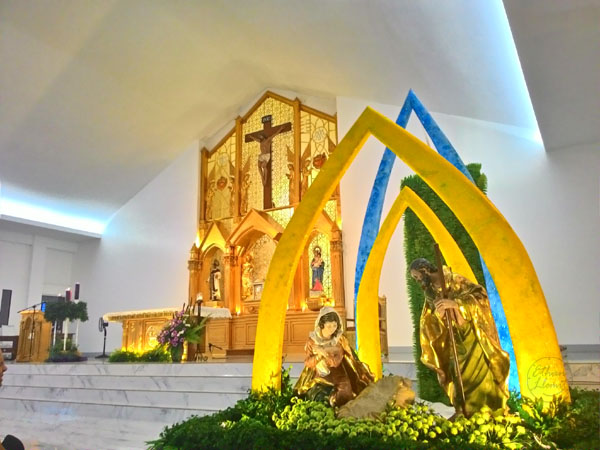 Simbang Gabi (also called Midnight Mass or Misa de Gallo) is a holy mass in Roman Catholic churches that is held at dawn. It’s part of the Philippine Christmas tradition to attend this mass for 9 days before Christmas Day. The schedule for this one-hour mass depends on the church but some starts as early as 4 AM.

Being in a dominantly Roman Catholic country, the Filipinos make it a habit to wake up early beginning December 16 to attend this mass. While many do this for religious or spiritual reasons, some (especially little children) attend this celebration with the thought that their wish will be granted if they complete the 9 masses.


As for me, the only time I completed Simbang Gabi was last year, two weeks after my salary-maker shut its operations down (link). I guess that’s the Universe’s sign that I should at least complete the holy mass, which I gleefully did. Now that I’m still not officially employed, I am hoping to complete another round of these solemn hours again.

Sidenote: By the way, I am available if you need to hire a premium freelance writer.

But enough about the religious/spiritual stuff of Simbang Gabi. I am here to discuss how this early-morning event can affect (or not) you if you’re a foreigner staying in the Philippines (traveller or tourist) during this 9-day period before Christmas most especially if you’re staying near a Roman Catholic church. Who knows, you’ll be able to discover more about your newfound Filipino friends (or maybe not).

1 | No Empty Roads at Dawn = Lowers Chance to Walk Alone

Because the churches are packed during Simbang Gabi masses (some even overflows to the roads especially in smaller parishes), a lot of people start travelling to the church around 3 AM or so with the hope that they can grab a good seat in the church. This means that around this time (especially within an hour before the mass begins), the roads are packed with cars and public transport while the sidewalks are filled with people and families walking towards the nearest church.

What does this mean to you as a foreigner in the Philippines? Well, at least you now have peace of mind that you can walk home safely at these hours when you’re partying late at night. Whether you came from a bar (most of which closes around 2AM, I think) or from a Christmas event, you know you can go back to the hotel safely at dawn because the public areas are lively. You won’t be walking on dark roads alone.

Take note though that roads will again feel like normal while the mass is being offered. Don’t worry, they become lively again after the mass when people are homeward (around 6AM or so).

Due to the high number of people in one area, it’s common sense that local government should increase police visibility. Other local authorities (e.g. baranggay tanods and city medic teams) will also be available to ensure smooth flow (like traffic) and to handle emergency situations.

What does this mean to you? Have more confidence in public at dawn knowing that there are officers who, with their presence alone, can deter crimes.

This is my favourite! I get to eat a lot of Pinoy food during this period than the rest of the year.

Just minutes before the mass ends (or maybe right after the mass ends if you don’t mind the crowd), visit a Roman Catholic church grounds and you’ll find a lot of vendors selling yummy Philippine delicacies like puto, kuchinta, budbod and others. Depending on where you are, you might have different varieties to choose from each day. So you might want to buy puto on the first day, budbod on the second, etc.


But like any other local vendors in Asia, be wary of those who ask for a higher price than normal especially if you don’t look like Filipino or at least Malay-looking Asian. You might also ask a Filipino friend to bring you some Pinoy delicacies when they get back from church.


If you’re a non-Filipino Roman Catholic travelling in the Philippines and want to attend one or all of the holy mass, here are some tips for you. Maybe some of these you know already or maybe some are new to you. I’m just placing these tips in random, just in case.